Note: this article was originally published on March 25, 2015 on chess.com

This past weekend I played in the Arkansas Open in Fayetteville, Arkansas.  The location for the tournament was atop Mt. Sequoyah, basically a large hill located on the east side of town.  The venue for the tournament was changed a few weeks before the start date, so it was questionable how big the turnout would be.  It turned out to be one of the bigger player lists in recent memory for this particular event, and the tournament started with 38 players.
The playing hall 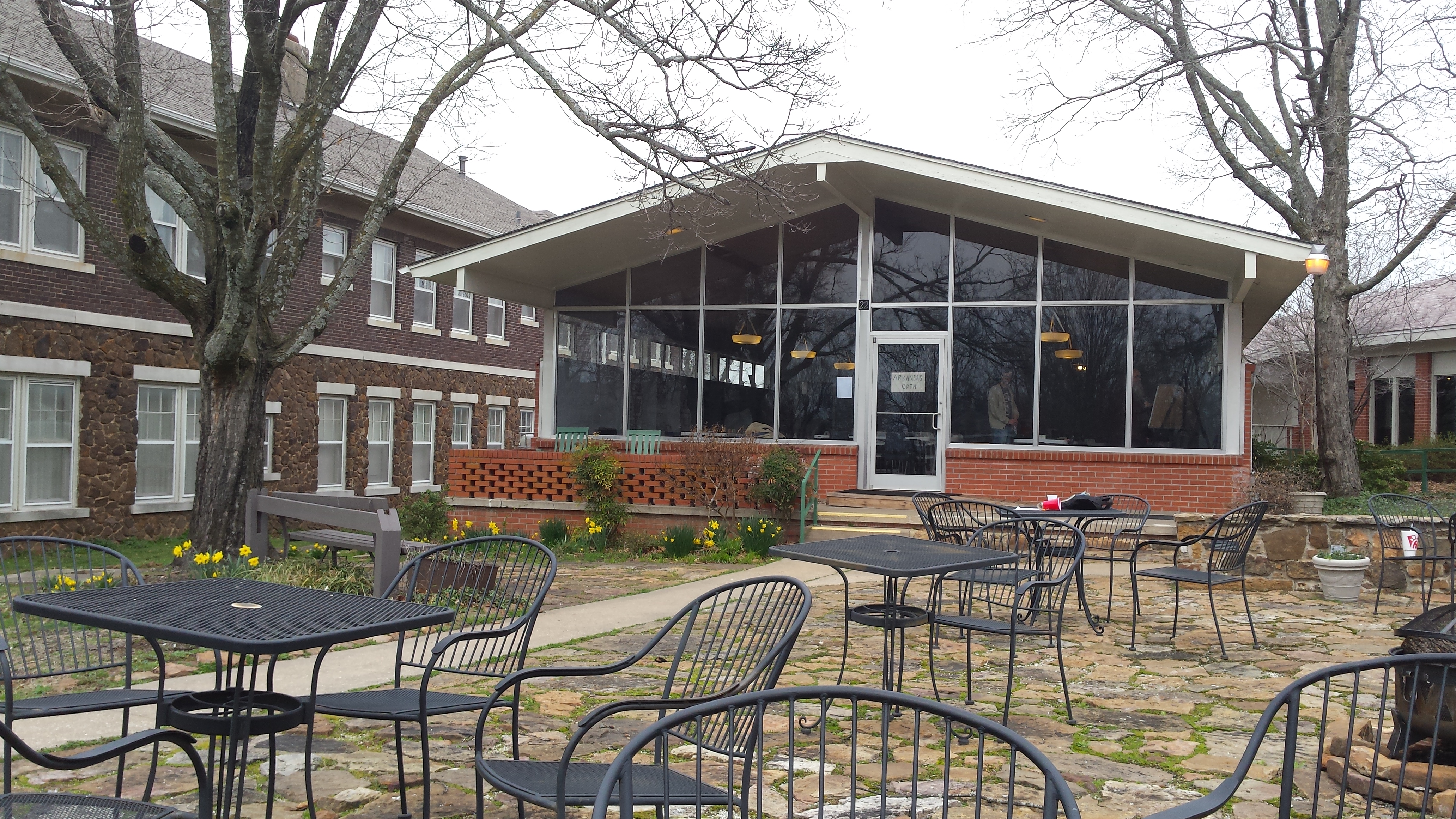 We got started a little late so that people could find their way to the top of the mountain for the new site.  Once we started, though, everything was normal.  I was above the midline, barely, and was thusly paired down.  I played a player rated about 600 in the USCF for my first game.  This player played very well for his rating and even gave me a couple of scares.  The game is below:

I patted my opponent on the shoulder and told him I thought he played pretty well.  Lunch time!  I had an hour or so before round two began so I hopped in the car and drove to Subway.  I know you are dying to find out, so six inch cold cut combo on9-grain wheat, toasted, with american cheese, lettuce, pickles, light mayo, and mustard.  Yum.  I think I took the photograph above after I finished the sandwich at the tables outside the playing hall.
Second round, I was paired with a 1920 rated player.  Yikes, for me, since I am most decidedly nowhere near that strength in USCF terms.  For me, I feel like I can compete with up to 1800s, but above that, I have real trouble.  Also, black pieces.  I shook my opponent's hand and started the clock.  For some reason, it didn't start right.  I might have thought I hit the button and actually didn't.  My opponent noticed and said something about it.  I fixed it quickly and on the game went.


This game took a little over an hour.  I didn't have to be back until well over two and a half hours, so I headed home (about a 25 minute drive for me).  I was upset at myself for messing up the opening, so I actually made some flashcards to review my repertoire choices for the Sicilian and ran through them several times before my evening game.
I arrived back at the site about 15 minutes before start time.  I hung around chatting with some of the friends I've made that were also there.  The times between rounds just hanging out with chess people are some of my favorite times during these tournaments.
My opponent was the last person to arrive for round 3.  All the games had started.  I made my first move and started his clock and waited.  He did finally come in about 10 minutes late.  I waited until he made his first move and then offered a handshake.  Here we go again.


Well, not a bad first day, but not a great first day.  Only real mis-step was the draw in round 3, but I guess that could be worse.  I headed home hopeful for a solid night's sleep.
When I arrived the next morning, I was feeling pretty good.  I checked the pairings and saw I had another lower rated player (this one in the 1200s).  He's actually a player from a club I play at in Ft. Smith a lot, so I've seen him around.  Before the game I was talking to a friend from that club, and he said he's way stronger than 1200 something.  He guessed he was probably 1600.  Great.  I don't mind playing stronger players, but why do I have to play them when they are 400 points under-rated?!
I set up for the game and waited for my opponent to arrive.  He arrived on time; we shook hands and got started.

I was extremely happy when this game was over.  I was sitting there with 2.5 out of 4 points and one more round to play.  I had already bested last year's terrible performance at this tournament by half a point.  I drove back to Subway and grabbed a sandwich again.  When I got back, after finishing my sandwich from the outside tables, I went back in to check the pairings for the final round.  No such, luck.  There were still two games going as the scheduled final round time approached.  Board one was still going with a knight vs. bishop and three pawns each, painful looking endgame.  I was glad I wasn't playing that one.  It ended maybe 5 minutes before the final round was scheduled to begin.  Most of the games were started on time, but the games involving the players of that game (and one other) were delayed slightly to accomodate lunch for those players.  My game began on time.  I had a final round crack at an 1800 rated player.  Let's do this!


I checked the standings on the wall before I left.  3 points out of 5 might be enough to tie for the class C money prize.  There was one player with 3 out of 4 going into the final round.  He was playing a higher rated player.  If he even draws, I'm pretty sure he would have top prize to himself.  There were a few other players with a shot at 3 out of 5 if they won, and at least a couple that had already achieved 3 out of 5, so if I do win prize money, it will probably be only a small portion of it.
Sadly, since I left immediately after my game, I have no way of knowing, yet.  The tournament hasn't been submitted to USCF for rating, yet, so I can't look it up online.  The results have not been published anywhere that I know of.  I'm waiting for the USCF report or a check in the mail.  I'll update when I know!
Overall, I was pretty pleased with how I played.  I felt a lot stronger at this tournament than at any tournament I've played to this point.  I'm going to keep plugging away and hopefully keep improving.  If you were at this tournament, I'd love to hear your stories, see your pictures, whatever you've got!
The analysis of each of my games here was just the quick "get down what you were thinking at the time as soon as possible" style analysis.  I will be revisiting each of these games over the course of the next week or two.  I might pubish results here, so if you are interested, stay tuned.  If you have any insight into any of the games, please make a comment!
Thanks for reading, I hope you enjoyed it.
update: USCF finally pubished the event, and I did not win prize money.
PS: please forgive my calling the "Scotch Gambit" the "Scotch defense" in game 5.  I have no idea what happened there.
at 7:25 PM