I found a piece of wood in my garage that used to be the bottom of a baby crib. We had gotten rid of the baby crib a few months earlier (trash!), but apparently had forgotten to throw out this bottom board. When I noticed it, I immediately thought it would make a very attractive table top with two chess boards painted onto it. It's just how my mind works. I've been looking for some sort of a fun project with wood and paint that I might even get some use out of, and this seemed to be perfect.

I wish I had taken a picture of the board before I started on it, but I didn't think to do it. There were some warning stickers glued all over the board, so the first step was to figure out how to remove those. It was much harder than I thought it would be. Peeling and scraping was just not going to work. I tried just directly sanding them off with very little success. Finally, I thought to use google. Apparently, the trick is to warm a little bit of vinegar and rub it on the target area. I was amazed as it came off with just a light brushing almost immediately. First problem solved. This might actually work.

I went to the store and picked up a few materials. I still expected something to cause this whole project to grind to a halt. I'd never done anything like this, and I had no idea what to expect. I picked up all the sandpaper I needed, some wood stain and a brush, and the three colors of spray paint I'd chosen.

I sanded the board down with each of the different grits of sandpaper until it was very smoooth and brought the board outside to apply the wood stain. I actually have tried to use wood stain before, but that was a disaster because I didn't even read anything. This time, I at least knew how to do it. It seemed to go pretty well, though I don't think I wiped the stain off as thoroughly as I should've. It was here that I started taking pictures of the project, so here is the board after the wood stain went on: 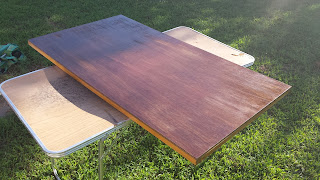 The coloring didn't turn out to be as consistent as I'd like, but that got better as the stain dried.  Next, I measured out two 18" x 18" squares and centered them on each half of the board.  I taped around the board and covered everything but the squares and spray painted them gray.  I was pretty happy with how the board areas looked after I removed the masking: 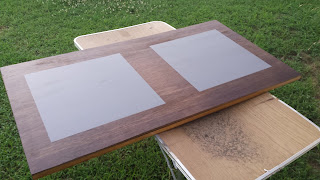 After I waited a couple of days for the paint to dry, I drew light pencil lines to mark where the chess board's light and dark squares should go.  I taped over every other rank and file of each of the chessboards, leaving 16 of the dark squares exposed.  I painted the exposed areas oxford blue. 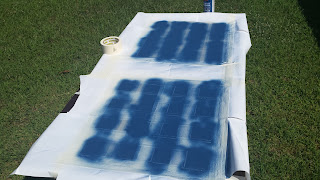 There was a lot more bleeding under the tape from the spray paint on these last two steps than I would like, and I kind of resigned myself to the fact that none of my lines would be as clean as I wanted them to be.  After the first set of dark squares dried, I covered the other set and painted the final 16 dark squares on each board.

Peeling off the masking tape after this last step revealed I'd made an error and had made one row of dark squares too big!  I'm not sure if I took a strip of tape off to reapply it and then never did, or what.  I really do not know how the error happened, but it clearly did!  I was pretty pleased with the rest of it, though. 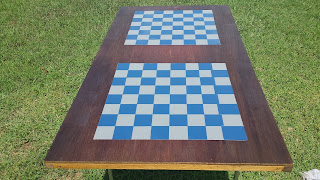 I had to take a little extra time to fix the mistake, but it wasn't too bad.  All I had left to do was the 1/2" black border to really set things off. 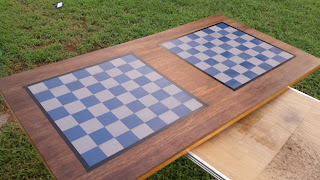 When I peeled the paint off of the last bit of the black border, I was a little disappointed because there was even more bleeding than usual.  Then I realized that it didn't matter that much, because this board really popped!  I brought it inside and put it on a table and started setting up two sets of chess pieces on it for a little photo session. 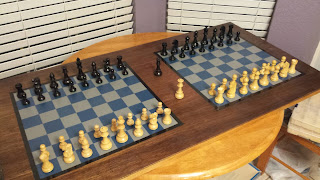 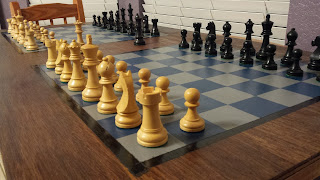 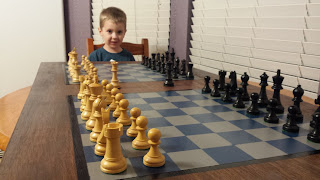 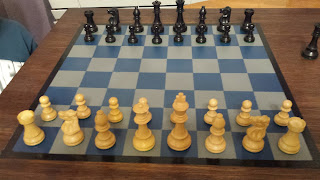 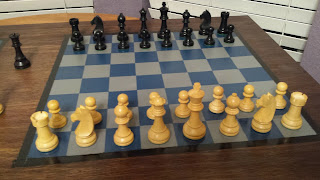 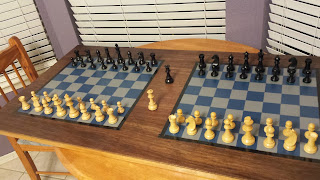 Sitting down at the table for the first time with all the pieces set up was an almost surreal experience.  I had made something that looked really nice with my own hands, sure, but another part of the feeling was that the colors of this chess board had only existed on my computer screen before now.  I don't think there was any way to get these two colors on a real chess board before.  I have used this blue and gray chess board online for years.  Having a nice, real version of the chess board in front of me felt so incredibly right to me.  It was like being home for the first time in a way.

Technically, I'm not done with the project.  I will be putting a few coats of polyurethane on it to smooth the surface and to protect it.  However, the current state of this dual chessboard is quite satisfying, and I'm going to enjoy it for a day or two first just in case I ruin it with my first ever attempt at applying polyurethane!